Zamenhof Day (also known as Esperanto Book Day) is the birthday of the creator of the constructed language Esperanto, Ludwik Łazarz Zamenhof. It’s widely celebrated as the Day of Esperanto by many Esperantists across the world. 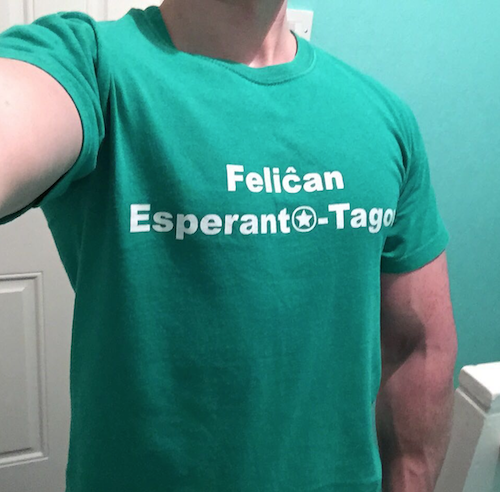 Zamenhof created Esperanto in 1887. His goal was to create an auxillary language that could be shared by everyone equally. A language where everyone is an equal and everyone, regardless of where they were born, can communicate and understand each other.

I first started learning Esperanto out of sheer curiosity. Almost for the same reason I may have otherwise pondered to myself “Hey, how do you insult someone’s mother in Klingon?” – which by the way, is to suggest that she has a smooth forehead (Hab SoSlI’ Quch).

Warning: Please don’t say this to any Klingons you know, as it’s very insulting, and they’re pretty good with a bat’leth.

To me, Esperanto was much more interesting than other constructed languages. I quickly realised that it’s a complete language with a rich vocabulary, a ridiculously simple grammar, and believe it or not, lots of fluent speakers across the world (and even a few native speakers).

After dabbling with the language for a long time, and studying it more deliberately in recent years, I have to admit that it has been one of the most enjoyable things I’ve done.

Esperanto has some unique attributes which makes it a fun hobby to pursue, with some big upsides if you decide to take it further.

If all that sounds so sweet that you’ve already cancelled your weekend plans, perhaps your next question is “How do I learn it?”

Well, since I’m here, allow me to give you a few tips:

That’ll nicely open up a conversation with any Esperanto speaker, and you’ll hear it quite often.

Just like other languages, you’ll probably immediately throw in:

To your amazement, you did not in fact ask the other person if they broke wind.

Given that you both speak Esperanto, naturally you’re both feeling pretty awesome about things, warranting the response:

Great thanks, and you?

You’ve just noticed your Esperanto friend is eating her peas one-by-one, and want to wrap up the conversation as quickly as possible:

Here’s a few cool things to note about this conversation.

All letters in Esperanto make consistent sounds, so unlike English (where ‘ough’ has approximately 1 billion different sounds), you can look at a written word and reliably say it.

Also notice how we have -as on the end of the word fartas? That’s how you make a verb (a doing-word) refer to the present tense in Esperanto.

And guess what? That’s always how you get the present tense version of a verb. I mean, how easy is that? Want the past tense instead? No problem, just change the -as to -is. The future? -os will be your friend. The best bit is that these rules never change – all verbs can be produced this way, with no exceptions.

You probably don’t believe me, but it’s true – if having the sort of grammar that brings tears of joy to the eyes of its learners was a crime, Esperanto would be doing life in maximum security.

Pop-quiz. How do you get the plural of a word in English?

Add an ‘s’ to the end, you say? Well sometimes, but it doesn’t always work. I definitely don’t have two foots. And while I’ve been told I only have half a brain, I figure it’s the stronger of the two halves I’ve kept.

In Esperanto, just add -j. You can add it to any singular noun or adjective. That rule never changes either.

If I have more than one kato (cat), I most certainly have katoj (cats). If I were to drink more than one biero (beer), and honestly, I never do, then I’d have consumed bieroj (beers), and would probably slur my vortoj (words).

In Esperanto, we don’t waste space in our dictionaries with both ‘good’ and ‘bad’, ‘left and ‘right’, ‘up’ and ‘down’. We just have one of them, and then use the prefix mal to create the logical opposite. Now you have fewer words to learn.

I can only imagine you’re finding this post bona (good), but if you aren’t (and let’s face it… you are), you’d be finding it malbona (bad).

The prefix mal can be used to prefix anything, assuming it still makes sense. One could say malsaluton, which despite stepping all over the toes of ĝis (bye), would make sense to an Esperanto speaker. It would no doubt also make them think you’re a bit weird, but that’s beside the point – perhaps you are.

Adverbs, adjectives, participles, and every other grammatical aspect of Esperanto has a similar sense of structure and consistency like the examples above, making it much easier to learn.

At this point, I’m pretty sure you could already have a simple conversation in Esperanto. Not convinced? Well, let’s find out.

Here’s a cute little Esperanto bot conversation I created for you. You’ll be the guy with the awesome barbo (beard). Look at the English translation to see what you need to say, and use the buttons below to say it in Esperanto. Once you’ve entered your part correctly, expect a response!

So there you go. Now you know a little more about Esperanto, and why this particular day of the year is known as Zamenhof Day.

Imagine your interest was asked to describe itself in one word. If you think it might use the word ‘piqued’, read on for a few pointers to get started learning.

For me personally, Esperanto has been a hugely rewarding experience, and it’s now something I value far beyond its initial attraction as an interesting idea.

If you do begin learning or playing with Esperanto, I wish you bonŝancon (good luck), and please feel free to reach out if you’d like any more pointers or have any questions.